Last week was another strong showing for the S&P500 in 2019.  In fact, so far, there have only been 3 negatives closes for the year. The last time we saw the markets start this strong was… oh yeah, last year.  Then, in February, everything tanked.  This is not to say that everything is gearing up to tank again. But it is to say the markets may be getting out ahead of themselves a bit.

From a technical perspective, we’re now in a fragile zone.  The fundamental data is holding thus far.  So, a bottom may have been put in on Christmas Eve 2018.  Typically, you’ll get some kind of pull-back — or even a re-test — after the drop and bounce the markets have just experienced. The key is where to measure from. The low on Christmas Eve of last year is a pretty easy spot to peg on the charts.  From that point, we saw a V-bottom recovery up until today.  How high this initial bounce goes is yet to be determined. As of last Friday, the S&P500 crossed above its 50-day moving average.  However, it’s still below it’s 100 and 200-day moving averages.

If there is no pull-back, presumably it’s because we’ve seen a material shift in expectations for the economy.  As of now, people are on the look-out for recessionary signals.  So, anything that pushes that probability farther out into the future would be greeted as good news to these markets.

As mentioned in our Q1 2019 Outlook, we expected the U.S. economy’s growth to slow this year as fiscal stimulus begins to fade. However, recent data, such as the ISM and Empire State manufacturing surveys, suggest that the economy is cooling at a faster pace than we anticipated. That said, as this week’s chart shows, this slowing in economic activity can be attributed to a deceleration in the soft data, which are survey and confidence based, while the hard data – measures of actual economic data – have remained fairly resilient. Housing has been the one exception on the hard data side, as higher mortgage rates have weighed on activity, but given the decline in rates at the end of the year, 2.0 housing may begin to pick back up. Soft data tend to be driven by sentiment, suggesting the U.S. government shutdown 1.0 as well as the lingering U.S.-China war have 0.5 weighed on how people are feeling about the current environment. While sentiment 0.0 measures should not be ignored, investors should find comfort in knowing that the underlying economy is not deteriorating as fast as the soft data suggest, as the hard data continue to point to a relatively healthy pace of economic growth. 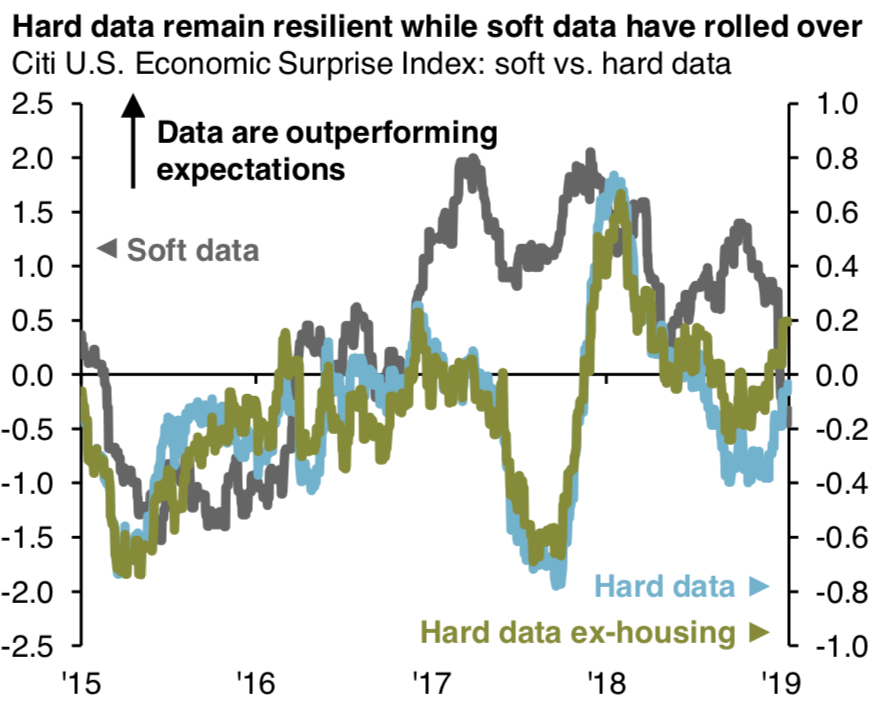 Quote of the week:
"Try to be a rainbow in someone's cloud."
– Maya Angelou