Markets have been skittish in recent weeks due to persistent, elevated inflation and

tightening. As tensions escalated between Russia and the West over a possible

Russian invasion of Ukraine, investors moved away from risk assets, such as stocks,

and sought the safety of U.S. Treasury bonds. Stocks were hard hit on Thursday as

reports surfaced that both sides were exchanging artillery fire. The slide continued

on Friday as prospects of a diplomatic offramp appeared to dim. While geopolitical

Market Committee meeting minutes (released on Wednesday) that suggested the

Fed may not act any more aggressively than current market expectations.

Last week three economic reports provided an update on the state of the economy.

The first was the Producer Price Index, which suggested that inflationary pressures

9.7%, the latter of which was near a record high. The consumer showed continued

strength as retail sales rose a better-than-expected 3.8%, though some of that gain

may be due to higher costs. Meanwhile, industrial production gained 1.4%, nearly

reaching its highest level since March 2019.

The big news is the saga taking place with Ukraine and Russia. While effective news

content to create market anxiety, the reality is these types of tensions have not had

big impacts on the markets in the longer term. Take a look below. We highlighted

the 5 most recent armed conflicts that impacted markets broadly. Five out of five

what many think. In fact, many might logically believe that uncertainty from conflict

means “risk off” until the conflict ends. This is not the case. There is always the "this

time is different" commentary, but we haven't seen real data to support that stance. 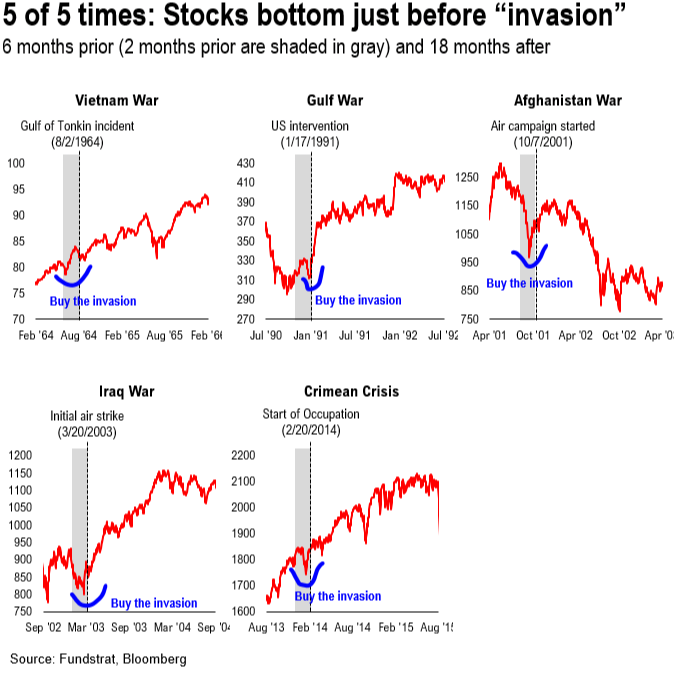 Volatility is likely with us through the first half of the year. The market is digesting

a lot of information and there's a lot of negative news priced in. Corporate earnings

are good and that is good news. Covid seems to be fading which is more good

news. Don't let the media make you believe the sky is falling or about to fall. It's

Have a great week!