“The stock market is designed to transfer money from the active to the patient.” – Warren Buffet

LOOKING BACK
The second quarter began by building on the first-quarter’s gains, with stretches of sideways
trading and incremental increases that led to multiple record highs over the course of the three
months. Encouraging economic data, a strong corporate earnings season, and the broadening
of the nation’s economic reopening was juxtaposed by increasing fears of inflation, a
short-lived spike in bond yields, and a simmering anxiety over potential changes in Fed
monetary policy.

With 99% of the companies in the S&P 500 index reporting earnings, 86% reported a positive earnings
surprise, with an average earnings growth rate of 61.0%, the highest since the fourth quarter of
2009.

Solid corporate earnings, however, did not drive the overall market materially higher, as inflation
weighed on investor sentiment. Many investors were troubled for much of the second quarter by an
acceleration in the rate of inflation, worried that the Federal Reserve could begin tapering some
of its easy-money policies sooner than expected. Some investors were particularly anxious about the
prospect of the Fed being wrong about the transitory nature of the pick-up in inflation, which
could require the Fed to slam the monetary brakes harder at a future date, potentially sparking a
recession and affecting stock valuations.

Stocks stumbled following a Fed announcement that interest rate hikes could begin in 2023—sooner
than it had anticipated—and that it had raised its inflation expectation, though it remained
steadfast in its position that above-target inflation would be transitory. The quarter
closed out on a strong note, as investors welcomed the announcement of an apparent
agreement on a $1 trillion infrastructure spending bill and news that banks had passed Fed
stress tests. The news was enough to send stocks to new all-time highs in the final trading days of
June.

Investors have enjoyed strong gains so far this year as stocks have responded well to rising
vaccination rates, economic reopening, fiscal stimulus, and an accommodative monetary
policy. If the market is to build on these gains over the next quarter and through
the year-end, it may depend on how several important questions are answered over the coming
months.

Second-quarter GDP growth is expected to come in very strong, perhaps the strongest in decades,
leaving investors to wonder if this represents peak growth. In other words, how much will the
economy continue to expand absent further fiscal stimulus and with the prospect of Fed tapering?
There is a case for above- trendline economic expansion as consumers spend their accumulated
savings and people begin filling open jobs once schools reopen and their comfort level
with the safety of returning to work rises. Nevertheless, economic expansion appears set to
slow, and that’s a potential hurdle for the market.

Then there is the matter of inflation and how “transitory” is defined. The Fed
believes that the recent acceleration in inflation is transitory, but transitory is not a
technical economic term. It’s a rather ambiguous term.

Is “transitory” three months? Six months? Or longer? The market may have a different
definition of transitory than the Fed, which could lead to future market dislocation.
For the three-month period ending May 2021, the annualized rate of inflation
accelerated to 5.2%, the fastest pace since 1991. The months ahead should provide a clearer
picture of whether inflation proves transitory or becomes a more sustained feature of a post-Covid
economy.

There is an additional, more overlooked, concern regarding inflation, i.e., its impact on consumer
spending. While inflation may be transitory, price increases generally are sticky. Thus,
it remains uncertain if increases in overall consumer prices will dampen consumer discretionary
spending, which investors may be expecting to drive future economic growth.

The Fed’s easy-money policies have been a contributing factor in the market’s sharp
recovery from its pandemic lows. Consequently, investors are expected to continue to focus on Fed
signals about the timing and degree of its plans to taper its monthly bond purchases. (Its June
meeting was silent on this issue.) Tapering is a concern, but given the excess liquidity worries of
many investors, any start of Fed tapering later in the year may turn out to be a welcomed
development.

Another market headwind is stretched investor sentiment. Though markets are hovering
around all-time highs, market breadth has not been exceptionally strong, which suggests
investor enthusiasm has moderated. A weekly survey by the American Association of Individual
Investors reflected a 10% decline in bullish sentiment and a concomitant rise in bearish sentiment
in the month of June. With potentially fewer positive economic surprises ahead and muted
buying sentiment, the market may mark time until a new catalyst emerges.

The economy appears in good shape, and most economists expect it to remain strong
into 2022. This portends a positive second half, but investors shouldn’t lose sight that the
market is currently priced above historical average.

While the comparison to pre-pandemic levels is natural, the market is already looking
further down the road. Some expectations are that the economy will hit a new gear as
the cycle continues. The pent-up demand in spending on both goods and services could be met by
a further ramp up in new hiring activity by businesses large and small. Today, there are as many
job openings in the U.S. as there are unemployed individuals.

One of the biggest investor concerns could continue to be inflation as new data periodically
emerges. By some measures such as the core consumer price index, inflation is already the highest
in three decades. And while price increases for consumers this year have been driven by the
recovery and supply/demand disruptions, the Fed continues to keep monetary policy loose. What's
more, the government continues to increase spending, adding to the over $5 trillion in pandemic
relief with new economic and infrastructure bills.

Naturally, it's these concerns and others that will occupy investors' minds during the
next phase of the business cycle. While the recession and recovery have been unusual
by historical standards, there are reasons to believe that diversified portfolios can do well,
even with the uncertainty of inflation and rising interest rates. Below are five insights that can
help keep these questions and concerns in perspective.

1. Has the economy fully recovered?
The U.S. economy, measured by GDP, had already recovered to within 1% of its pre-pandemic peak at
the end of the first quarter. All signs point to an economy that achieved new highs in the second.
From industrial production to retail sales, nearly all gauges of economic activity show signs of
strong growth.  Of course, this is expected during the early stages of a recovery and reasonable investors

should expect the pace to slow somewhat.

2. Are stocks still attractive?
The economic recovery has directly translated into a recovery in corporate profits. S&P 500
earnings- per-share are also back to pre-pandemic levels which helps to make valuations levels more
attractive. Like GDP, consensus estimates are for earnings to grow at a healthy pace over the next
12-24 months.

3. Will inflation overheat?
One red flag has been rising inflation which is often a sign of an overheating economy. The fact
that price pressures have generally been subdued since the early 1980s has made it all the more
important for investors to understand the risks to their portfolios.

However, it's also important to understand what is driving inflation today. First, the recovery is
naturally pushing prices higher compared to mid-2020. Second, supply and demand disruptions have
occurred across industries but should eventually clear. Third, the Fed continues to keep monetary
policy loose and the government is stimulating the economy. While the first two factors could
resolve themselves over time, the last one is still a significant uncertainty.

4. How big is the government deficit?
Government emergency spending over the past 18 months pushed the federal deficit to levels not seen
since the Great Depression. However, this is typically what happens during economic crises and
times of war. As the economy recovers and emergency stimulus is no longer needed, the
deficit should improve as a percentage of GDP.

While many would prefer that the government run balanced budgets or generate surpluses for a rainy
day, this seems unlikely. Instead, it's important to not overreact in one’s portfolio
to short-term government spending.

5. Will the Fed end the party?
With the economy fully recovered and inflation rising, many are expecting the Fed to begin
"tapering" its balance sheet expansion and then raise rates. The Fed's latest projections show that
they expect rates to begin rising in 2023 - at least a year and a half away.

Of course, this could begin sooner if the data heats up more. Even when the Fed does begin to slow
its bond purchases, it will likely do so gradually. All told, the Fed will probably
be cautious and keep monetary policy loose for quite some time.

The bottom line? While the first half of the year was historic by many measures,
investors should stay balanced and diversified as we enter the next phase of the business cycle.

For now, the current backdrop remains solid. A record number of companies have issued positive
earnings guidance for the second quarter. The U.S. economy is projected to deliver exceptional
growth in 2021 and 2022. And household finances are in their best shape in decades.

However, there are also some troubling signs of investor complacency, fueled in part
by the Fed’s easy- money policies.

U.S. junk-bond yields dipped to 3.8% in June, hitting a record low as investors felt comfortable
reaching for higher-yielding assets. Meanwhile, during the past 12 months, nearly 750
money-losing companies have issued stock to raise capital, exceeding those that make profits by
the biggest margin since at least 1982, according to Bloomberg.

Equity valuations also continue to look stretched by historical standards. After surging more than
90% from its March 2020 low, the S&P 500 trades at a forward P/E ratio – which uses earnings that
already exceed pre-pandemic levels – above 21, marking its highest level since the early 2000s. Even
excluding the technology sector, the S&P 500’s forward P/E ratio sits at about 20, near levels not
seen since 2001.

Should the Fed need to move more aggressively to combat inflation, or if some other
unexpected shock materializes, a reckoning could be coming to companies with the most bloated
valuations and elevated risk profiles as investors reset their expectations.

That said, we don’t know how the future will play out, and things can change quickly. So, shifting
market sentiment like we saw in June typically has no bearing on our investment process. Our focus
remains instead on building durable portfolios that will persist regardless of how inflation and
interest rates pan out.

The reality is one must remain invested through all markets to be a successful investor. Trying
to time or jump in and out the market based on sentiment has proved to be a fool’s errand at best.

If you have any questions or would like to discuss anything in this update or any other matter,
please feel free to give me a call. As always, I’m honored and humbled you have given me the
opportunity to serve you. 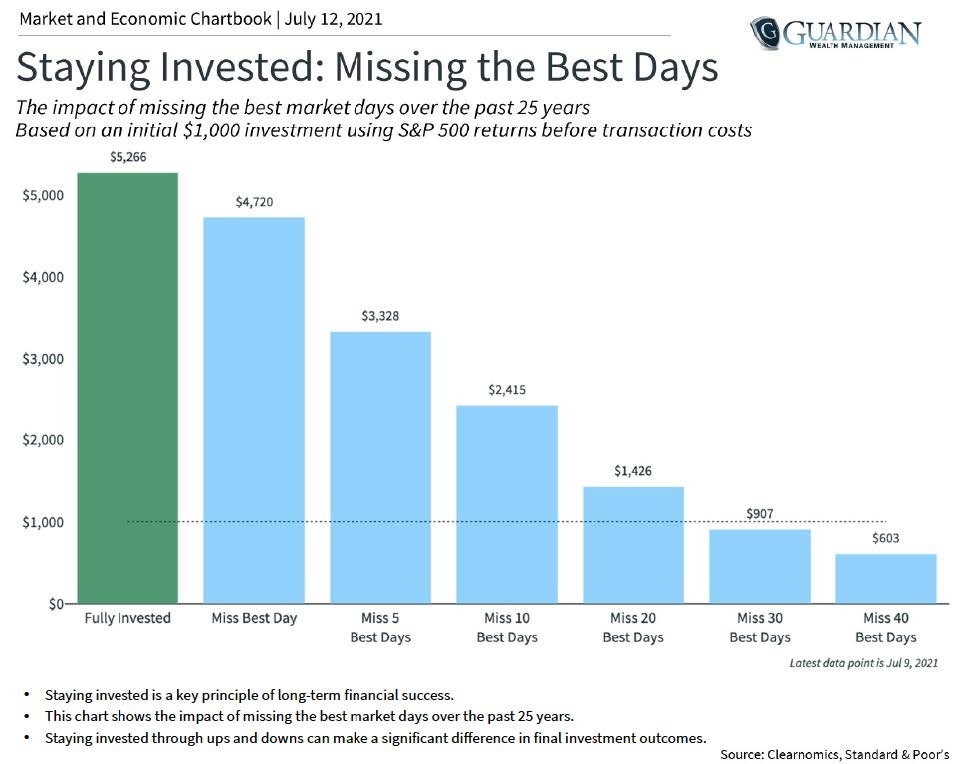