As we begin the final quarter of 2021, the economy is shifting from a recovery phase to a sustained

expansion. Investor sentiment has shifted alongside this, swinging from bullishness to bearishness. This is

understandable because, while the underlying trends are positive, it's no longer the case that the economy

and markets have nowhere to go but up. Challenges such as the pace of growth, fears of stagflation, debt

problems in China, Fed policy, the government debt ceiling and more are weighing on investors' minds. How

can investors balance risk and reward with a long-term perspective during the final months of the year?

The truth is that investing is never easy except in hindsight. In the moment, there are always concerns that

worry investors, even when they have a sound financial plan and portfolio strategy. Just this year alone there

have been topics as far ranging as the presidential transition to the delta variant and Afghanistan. Yet, the

S&P 500 had strong positive returns through the end of the third quarter. The markets repeatedly show that

those who can stay disciplined and look past the daily headlines are often rewarded, regardless of how

Today, the big issues that weigh on markets can seem nearly insurmountable, as they often do. The nature

of the short recession last year, which only lasted two months, and the swift recovery have been unlike any

cycle in history. This has made it difficult to measure and interpret traditional economic data such as inflation

and growth rates. Even when the data return to pre-pandemic levels, the year-over-year percentage changes

can be extraordinarily large.

On top of measurement and interpretation issues, there have also been real structural challenges, most

notably around global supply chains. Much of this is rooted in the on-going disruptions in manufacturing and

shipping that have affected industries from semiconductors to construction materials. While it's reasonable

to expect that these issues will be resolved, trying to predict the exact timing is difficult if not impossible. The

These problems not only affect the performance of companies, stocks and sectors, but they are also an input

into monetary and fiscal policies. One of the Fed's key mandates is to keep prices stable which will require

reducing asset purchases and eventually hiking rates. At the same time, Congress and the White House are

garner investor attention, seasoned investors have been through many such periods over the past two

decades. In almost all cases, the best course of action was to stick to appropriately-tailored investment plans,

ideally with the support of a trusted advisor.

rise after pausing for two quarters. This has put downward pressure on tech-related sectors, counter-

the past year. Not only will interest rates likely climb further, but investors should continue to expect higher

levels of volatility. Only at the end of the third quarter did the S&P 500 experience its first 5% pullback for the

year. Such short-term pullbacks are normal for markets and investors should be comfortable with greater

uncertainty in the months to come.

corporate profits - factors that do not depend on how investors feel. Ultimately, long-term investors ought to

position themselves for years and decades, not days, weeks or months. By most measures, we are still early

in the business cycle despite the shared feeling that the pandemic has lasted a lifetime already. Achieving

financial goals requires true dedication and discipline, regardless of what markets are concerned about in

the short run.  Below are a few points that are worth expounding upon.

1. The economic expansion is still strong 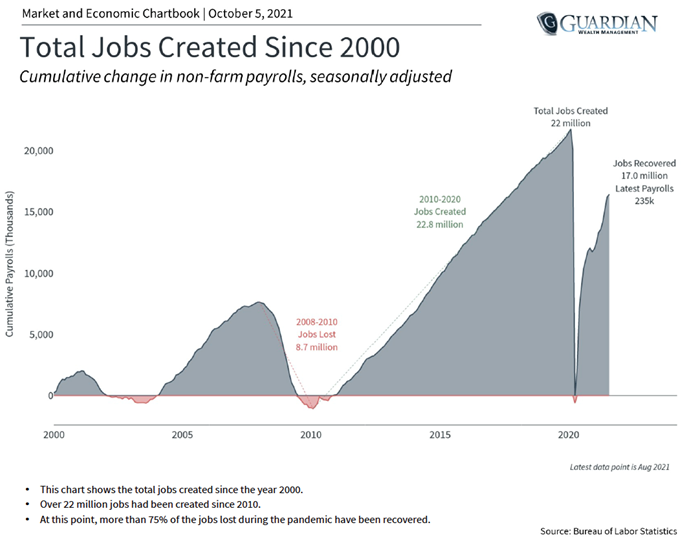 The economy is still growing rapidly 18 months after the unemployment rate peaked at 14.8%. U.S. GDP has

surpassed pre-pandemic levels, as have corporate profits, and many measures of activity are at multi-decade

For many, jobs are the key metric since the pandemic directly impacted individuals' ability to work and earn

a living. Over 75% of the jobs lost during the pandemic have been regained and the unemployment rate has

fast enough. There are officially more job openings than unemployed individuals - an imbalance that is

positive but that speaks to the changing nature of worker skills, job locations and more.

2. Inflation remains high and will depend on supply constraints 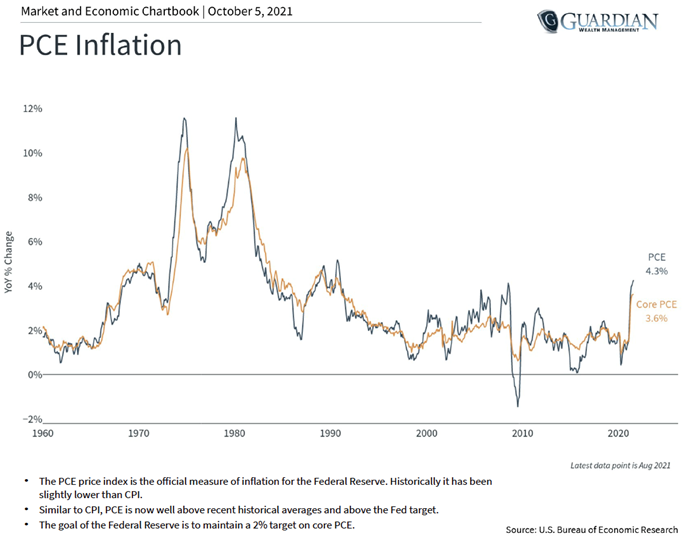 Inflation remains elevated across a number of traditional measures. The PCE inflation rate favored by the

Fed, for instance, is at its highest levels since the early 1990s. The Fed itself has made it clear that their

inflation targets have been reached, setting the stage for a reduction in asset purchases.

Many different factors are often referred to under the term "inflation." Traditionally, inflation is seen as a

monetary phenomenon. This made the 2010's perplexing to many investors since vast amounts of monetary

stimulus failed to materialize in the form of pricing pressures. Today, the biggest inflationary factors are the

these effects will likely improve over time. 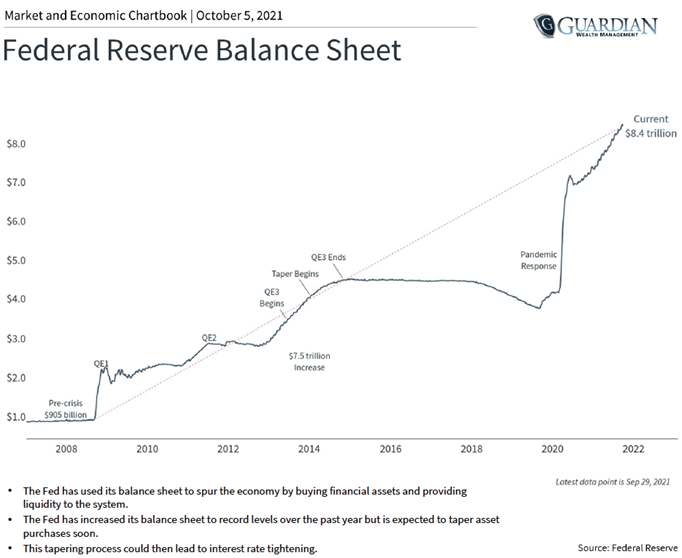 The Fed will likely begin tapering its asset purchases in the fourth quarter. The central bank has been

that will last well into 2022. They have also communicated that rate hikes will require a different, more

stringent set of criteria and will likely not begin until after their asset purchases end.

For investors, this means that there will likely be upward pressure on interest rates over a long period of time.

Still, investors should not overreact to these gradual rate rises, especially given the extraordinarily low level

4.     Government spending and the debt ceiling are front and center 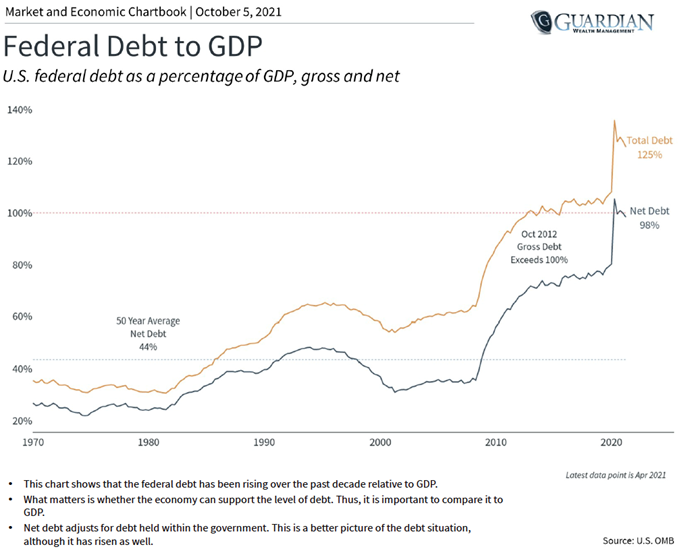 Partisanship in Washington is on full display as a number of issues are being discussed. In the short run,

scenario. In the long run, new spending proposals will have an important impact on infrastructure, taxes and

While these developments are important to watch, investors ought to maintain a long-term perspective on

the impact of Washington policy on markets. Financial markets and portfolios have performed well across a

variety of party leadership and tax regimes. Regardless of how one personally feels about new bills and

proposals, it's important to focus more on staying invested.

THE MEDIA – A WORD OF CAUTION

I may be preaching to the choir, but I must caution you to take what you hear in the media with a grain of

salt.  Regardless of the network or format, remember who pays the bills for the media and how they set their

rates.  Advertisers pay the bills, and they pay the highest rates to the media with the most viewers or readers.

I am not saying all journalists are bad, they are not.  However, most work for big corporations and big

For example, there is a very well-known talking head who is a guest on many financial shows and even has

his own on CNBC who opines daily about the market.  This time last year he went on and on about how most

energy and oil companies were “uninvestable” and were doomed.  Since then, oil prices and many energy

companies have gone up almost 100% from where they were at the time of the “tip.”  This is just one example.

Day in and day out I hear almost nauseating advice come from financial media.  They sell hope and fear and

skew numbers to make their “news” more sensational.  Look at the charts below going back over the last 5

This is going to be true for any media.  Good news just doesn’t sell, sensationalism does.

Our portfolios remain invested in businesses that, in aggregate, generate solid cash flow and maintain strong

The reality is one must remain invested through all markets to be a successful investor.  Trying to time or jump

in and out the market based on sentiment has proved to be a fool’s errand at best.

If you have any questions or would like to discuss anything in this update or any other matter, please feel free

to give me a call.  As always, I’m honored and humbled you have given me the opportunity to serve you. 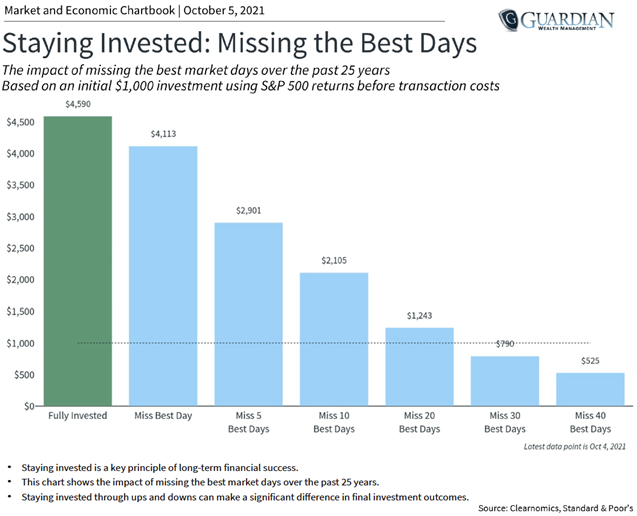 Securities and Investment Advisory services offered through Calton & Associates, Inc., Member FINRA, SIPC.  Guardian Wealth Management, LLC and Calton & Associates, Inc. are separate entities.  The information contained in this communication has been derived from sources believed to be reliable, but is not guaranteed as to accuracy and completeness and does not purport to be a complete analysis of the material discussed. The opinions expressed herein do not necessarily reflect those of Calton and Associates, Inc., and are subject to change without notice. Calton and Associates, Inc. did not assist in the preparation of the material contained herein and makes no guarantee as to its accuracy or the reliability of the sources used for its preparation.