“I wish I had an answer to that, because I’m tired of answering that question.” – Yogi Berra

WHAT A DIFFERENCE A YEAR MAKES

The market limped into 2019 following the worst year for stocks since the 2008 financial crisis, and the worst December for the Dow since the Great Depression.

Investors feared a global recession as economic growth slowed, the Fed was thought to be raising interest rates too quickly given the economy’s fragility, and trade tensions with China mounted. Twelve months later, the S&P 500 finished the year with strong gains and the U.S. inked a phase one trade deal with China.

Consumers and businesses have lived in a golden era of capital availability with easy access to cheap financing. Low interest rates and stimulus actions from central bankers have effectively led to a decade-long scramble for yield and an overall surge in asset values.  I believe some cautiousness is warranted in this environment where many investors are happily marching further out on the risk curve (whether they know it or not) in pursuit of higher returns.

There are surprisingly few matters we have control over as investors. I can’t tell you which of our holdings will have a great 2020, and which will face challenges.  I’d be skeptical of any so-called expert who claims they can. In fact, over the last 35 years, U.S. stocks seen as sure winners by analysts on average performed much worse than stocks predicted to flop.  Just take Boeing (BA) for example.  This time last year everyone was as bullish as they could be on this company.  As it turns out a year later, problems with its 737 Max airplane caused crashes and the company’s bread and butter plane had to be grounded, it’s CEO was fired, and the stock lost a third of its value.  Now, this is no type of call on Boeing, merely an example of how sentiment can go terribly awry and why diversification matters.

LONGEVITY – ONE FOR THE RECORD BOOKS

The current economic expansion began in July 2009, according to the National Bureau of Economic Research (NBER), the official arbiter of recessions and expansions.

Ten years later, the economic expansion entered the record books, surpassing the long-running expansion of the 1990s. Following the financial crisis and Great Recession, few thought the expansion would last this long. Few thought we’d ever see the jobless rate fall below 4% (percent) again. Once again, the U.S. economy has been surprisingly resilient.

That said, should we really be surprised? The U.S. economy is incredibly dynamic. The attributes that make America the greatest nation in the world continue to pay economic dividends. Once again, the economy bounced back when many thought it was down for the count.

That leads us to the next question, and one of a shorter-term nature. Might a recession be lurking in 2020?

A Conference Board survey of CEOs and top-level executives noted, “For U.S. CEOs, a recession rose from being their third biggest concern in 2019 to their top one in 2020.”  Global growth slowed last year and activity in the U.S. manufacturing sector has been soft. A recession is inevitable, but is 2020 the year? 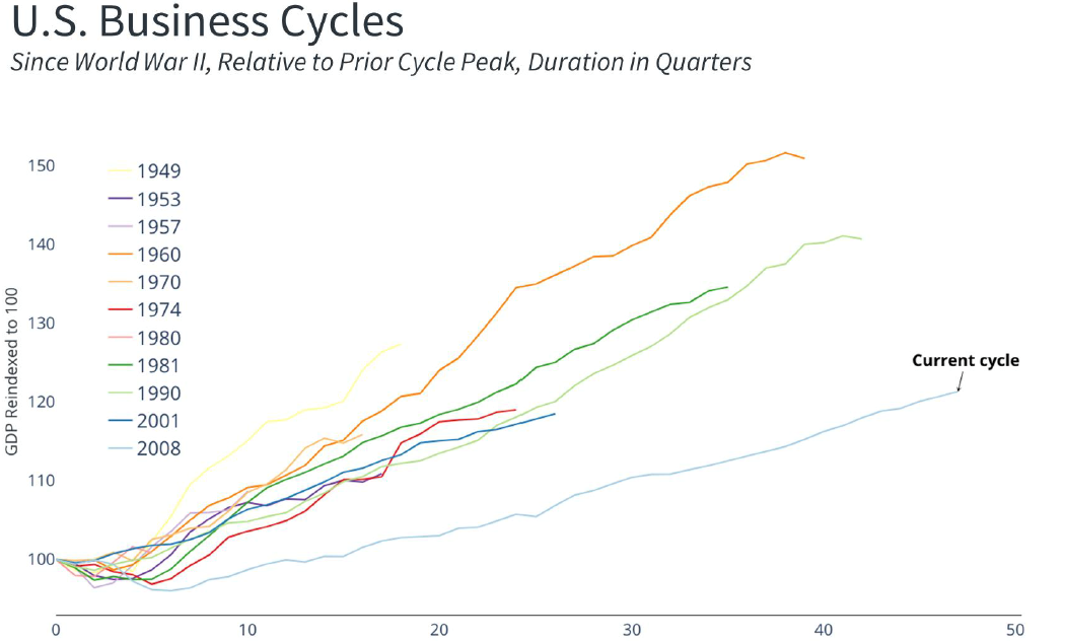 Fed economists have warned about the rising downside danger to the US economy in the year ahead, with the central bank’s statistical models on the likelihood of a recession in the medium term increasing.

Keep in mind the Fed cuts rates in an effort to stimulate the economy.  Lower rates encourage borrowing which in turn is supposed to generate spending.  The Fed has indicated they are on pause at the current moment when it comes to interest rates.  After several cuts in 2019, they are taking a wait and see approach.  If only that were true.  One of the other tools in the Federal Reserve’s toolbox is the ability to purchase bonds in the open market.  This increases demand for bonds, driving up prices while simultaneously lowering market interest rates.  We began 2019 with a fed funds rate of 2.25%-2.50% and ended the year with a rate of 1.50%-1.75% (percent). Undoubtably, it was a dramatic about-face that was dictated by a changing economic environment.

As mentioned above, the Fed stopped shrinking its balance sheet. By year end, the Fed was back in the open market purchasing shorter term bonds and T-bills. While it refuses to use the term “QE,” or quantitative easing, in effect it’s employing a similar policy to what it used earlier in the last decade. Recently, Fed Chief Jerome Powell hinted that he is in no hurry to take back any of the rate cuts in 2020.

Think of it this way, the Fed has their finger on the stock market and economy scale and is willing to push a little harder if need be, to get the numbers they want.  They can’t control the day to day, but they can provide the liquidity required to develop a general trend. 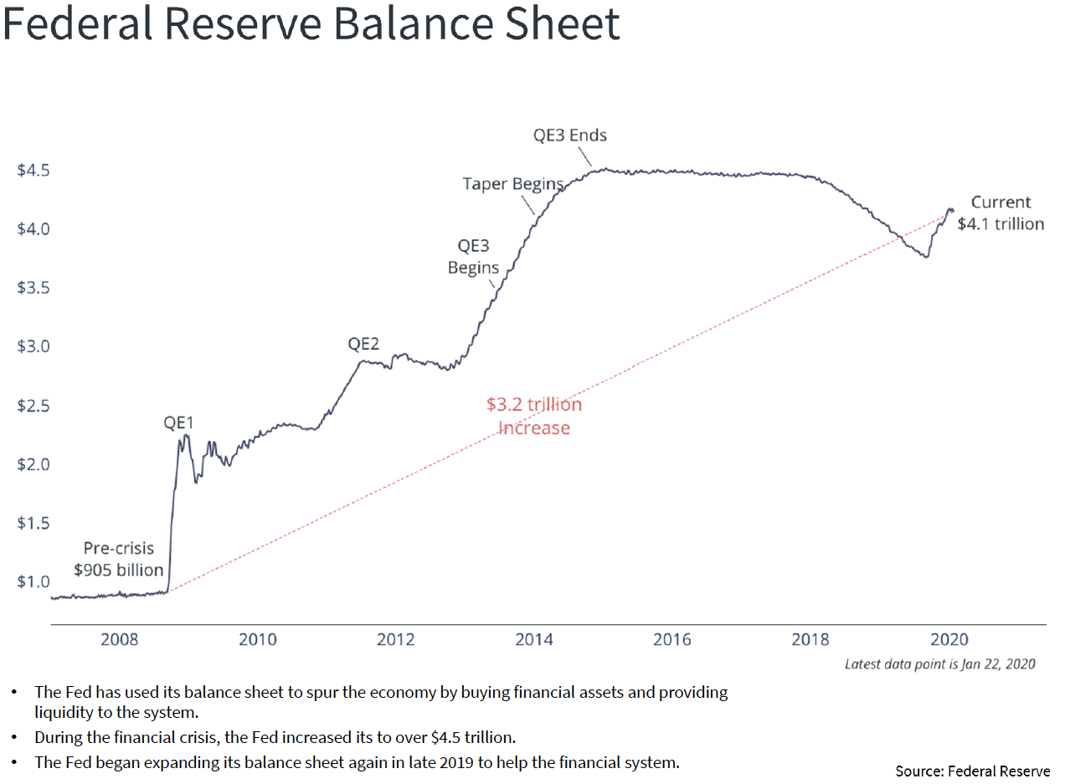 The Setting Every Community Up for Retirement Enhancement (SECURE) Act was attached to this year's spending bill and signed into law on December 20, 2019, with the bulk of its provisions becoming effective on January 1, 2020. The tentacles of this new law are far reaching and will significantly impact millions of retirement account owners and their beneficiaries.

While some long-standing estate planning practices have been eliminated, new twists within the SECURE Act have opened savings doors to many who were previously shut out. Here is an analysis of the relevant changes that will have the most widespread effects to individuals like you.

The SECURE Act raises the age for beginning required minimum distributions (RMDs) to 72 for all retirement accounts subject to RMDs. Any IRA owner who turned 70½ in 2019 or earlier is still bound by the old rules and cannot take advantage of the new age 72 rule.  IRA owners reaching age 70½ in 2020 or later (those born on or after July 1, 1949) fall under the SECURE Act and will not have to take their first RMD until age 72. As with previous guidelines, the first RMD can be delayed until April 1 of the year after the account owner reaches age 72.

Stretch Eliminated for Most Non-Spouse Beneficiaries

The lifetime stretch IRA is replaced with a 10-year rule for the vast majority of beneficiaries. Generally, this change applies to deaths after December 31, 2019. The 10-year rule dictates that accounts must be emptied by December 31 of the tenth year following the year of death. There will be no annual RMDs, instead, the only RMD on inherited IRAs (including Roth IRAs) is the balance at the end of the 10 years after death. For deaths in 2019 or earlier, regardless of whether the beneficiary has claimed the account yet, the old stretch rules are grandfathered.  In essence, this new rule means the account must be emptied and the taxes paid by the end of the 10th year after death.  This is really a bummer for those non-spouse beneficiaries who inherit retirement accounts going forward.

10% Penalty Exception for Birth or Adoption

Main Points of SECURE Act to Keep in Mind

Money left to competent, nondisabled adult descendants will have to be distributed within 10 years after the year of death.  These beneficiaries may potentially be in high tax brackets. Naming a trust as IRA beneficiary because of specific concerns could lead to exceptionally high taxes due to the lofty tax rates on trust income.

There are estate planning options to minimize taxes to beneficiaries such as buying life insurance to help pay the taxes, Roth conversions, leaving retirement benefits to a charitable remainder trust, and leaving such assets to a trust with a disabled or chronically ill, younger beneficiary.

We can talk about what might work best in your specific situation.

Control what you can control.

You can’t control the stock market, you can’t control headlines, and timing the market isn’t a realistic tool. However, you can control your portfolio. Your plan should consider your time horizon, risk tolerance, and financial goals. There is always risk when investing, but we tailor our recommendations with your financial goals in mind.

The beginning of this update has the quote from Yogi Berra which says, “I wish I had an answer to that, because I’m tired of answering that question.”  The question is, of course, “when will the business cycle peak occur and when will the stock market roll over?”  The simple and honest answer is; “I don’t know.”   We are likely in the “boom” phase of the economy which could last for some time, but also ultimately precedes downturns.  I am not lucky enough to try and call market tops and bottoms.  I believe you have to be in the game in order to win.  Thus, our approach is a fully invested, but somewhat more cautious strategy at this time.  If the market continues to rise, we will participate, but if it doesn’t, we will experience less pain.  It has been said the stock market takes the stairs up and the elevator down.  A reserved approach will pay off in spades once those elevator doors close and the descent begins.  We’ve also run stress tests on your portfolios and tried to forecast downside volatility, so we know we are in line with your tolerances.

For our friends, if you haven’t had your holdings stress tested, please reach out as it is important to really know how much risk you are taking and how different scenarios can affect you.  There are various ways to still have upside in the market while attempting to mitigate downside volatility.

No one knows what the next catalyst will be that ends this current expansion and resets the economy before the next expansion.  Perhaps it will be the Coronavirus which has captured the headlines and the current news cycle.  If consumers stay home long enough, it’s possible to derail the economy.  However, I suspect Jerome Powell of the Fed and other central bankers are ready, willing and able to provide stimulus at a moment’s notice to try and keep the party going.  As I mentioned earlier, they have their finger on the scale and don’t seem to have a problem placing their whole hand on it to keep this thing moving.  The old saying goes that no one rings a bell at the top.  If you listen to the talking heads, someone has been ringing a bell every day since 2009, and they’ve been wrong.

There will be something which will eventually derail the current expansion.  When this happens, it will “feel” bad.  Downturns always “feel” bad.  The following few sentences have appeared in this update several times and will probably continue to appear since they are so true.  We have been through changes in economic and market cycles before and we will go through them again in the future.  As Warren Buffett stated in his annual letter a couple of years ago, “It’s been a terrible mistake to bet against America, and now is no time to start.”

If you have any questions or would like to discuss anything in this update or any other matter, please feel free to give me a call.  As always, I’m honored and humbled you have given me the opportunity to serve you. 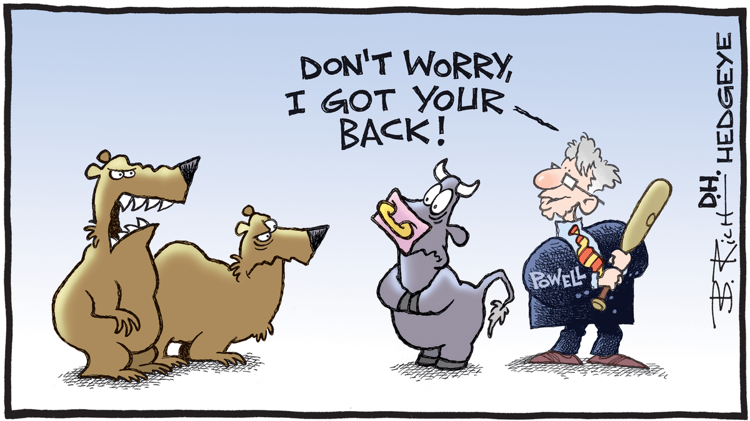